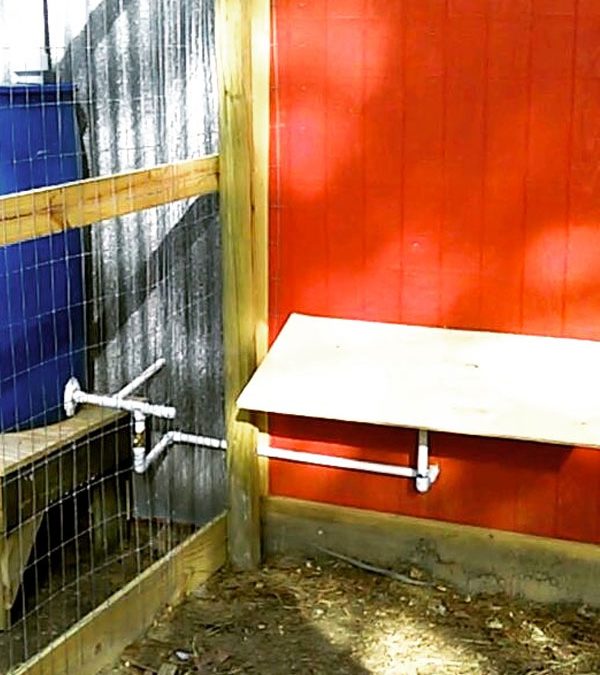 When we first decided to repurpose the greenhouse building into a chicken coop, the ability to have running water in the coop area wasn’t really taken into consideration. Since then, the biggest hurdle to providing our chickens with fresh water is the fact that our closest watering point in on the opposite side of the house. Rather than dragging over 200 feet of gardening hose, we opted to build a rain catchment system that would gravity feed a chicken watering system. 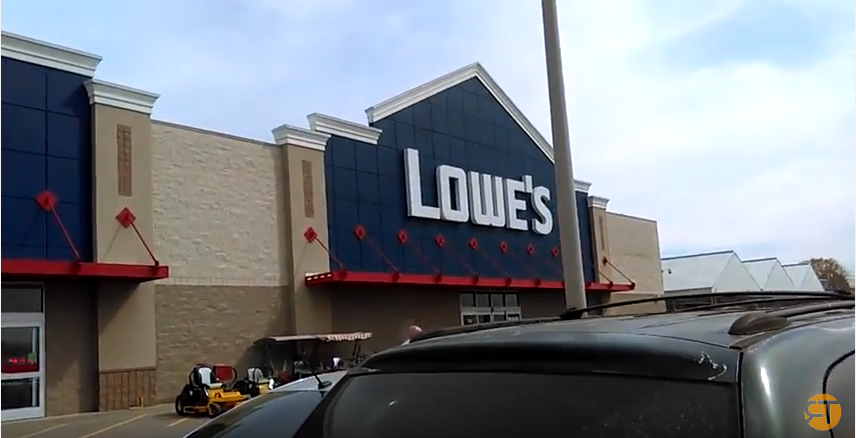 Our first stop was to our closest (30 miles) Lowe’s. The biggest investment we made for this project was the gutters and a few extra PVC parts for the self-watering system. All-in we only put in about $75 into this project. The rest of the materials came from lumber and PVC we already had on the homestead. Since we don’t have gutters on the house — yet — or the carport, this was good practice for when we add gutters to the outside of the house and attach additional water totes.

With the help of my father-in-law, we started in on making the watering system. While he worked on the PVC system, I created the base to support the 55-gallon rain barrel. A full 55-gallon rain barrel will weigh roughly 485 lbs, so I wanted to make sure this stand would hold up to the weight. Again, using what we had on-hand already, I made a 30×30 frame out of 2×6 lumber. To set on top of that, I cut out a 30×30 OSB board and screwed it on top of the frame. For the legs, I used the remaining 2×6 lumber and cut 16″ legs. For additional support, I cut 1′ support braces with 45-degree cuts on both ends. 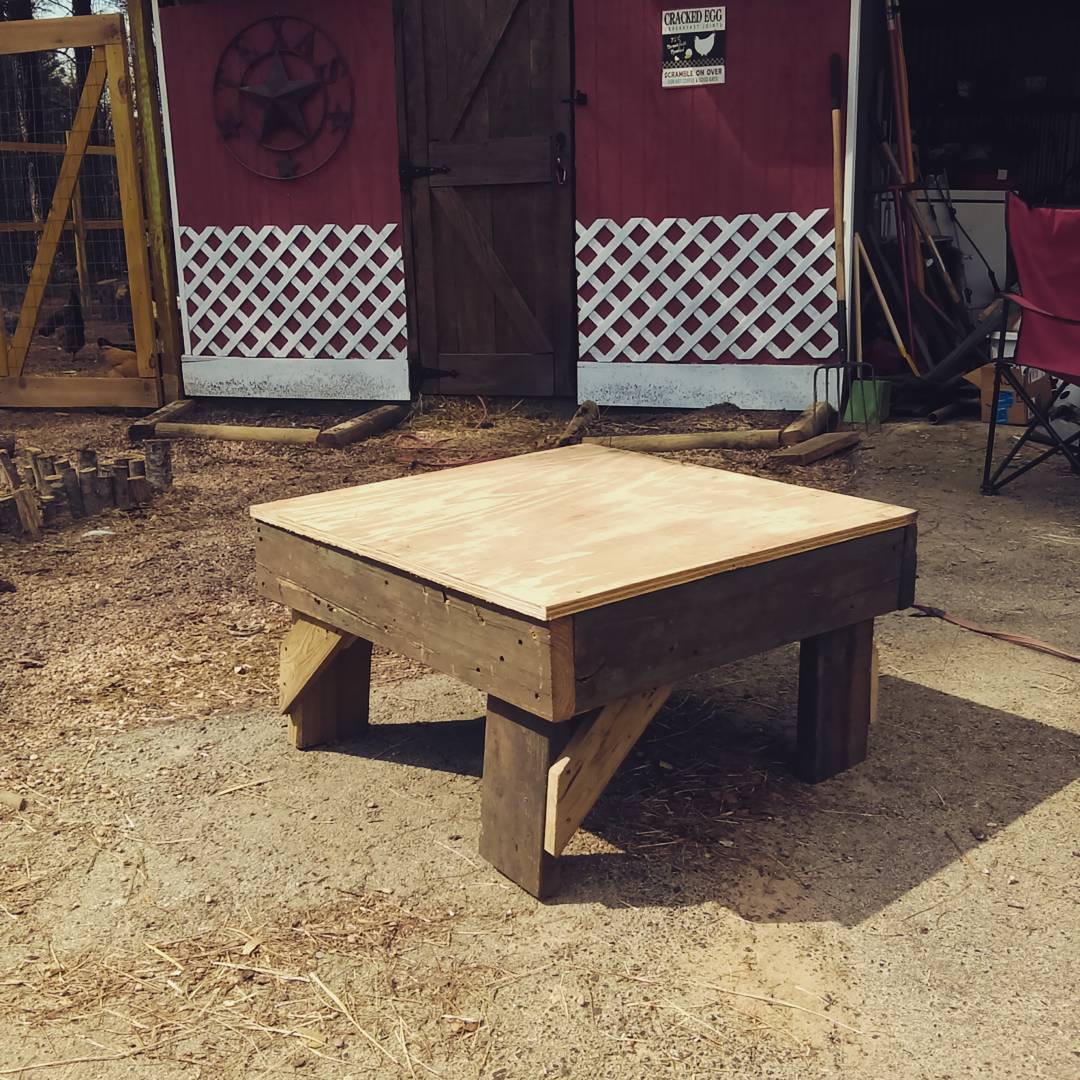 While I was busy with the base, my father-in-law was assembling all the PVC pipe, connectors, and elbows to create a dual-serving system. Because we also wanted the chickens to have access to the water on the inside, the system was designed to go inside the coop as well. We picked up a pack of drinker cups with the “tee” fitting already attached along with regular poultry nipples. Because the cups don’t (or shouldn’t) leak as much as the nipples do, we decided to set those on the inside of the coop. 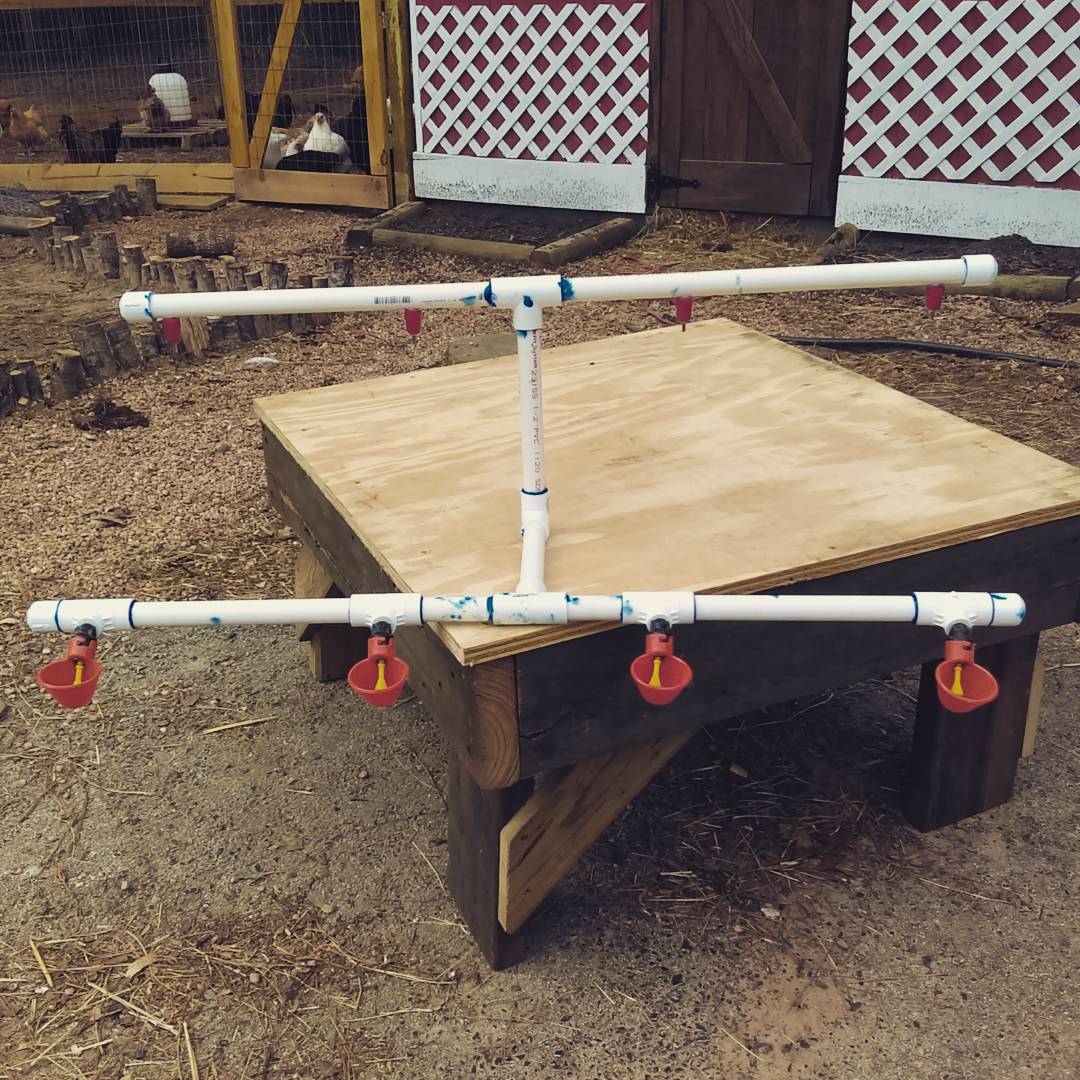 The back of the carport didn’t have any gutters on them. So, with the two 10′ gutters, we created a long run of gutters under the roof. A little improvisation was required to make some look-outs and fascia wood to hold the gutters. While at Lowe’s we also picked up some Gutter Guard to keep those pesky pine needles out of the system. And, because this install wasn’t for the house, we weren’t too concerned about going fancy here. 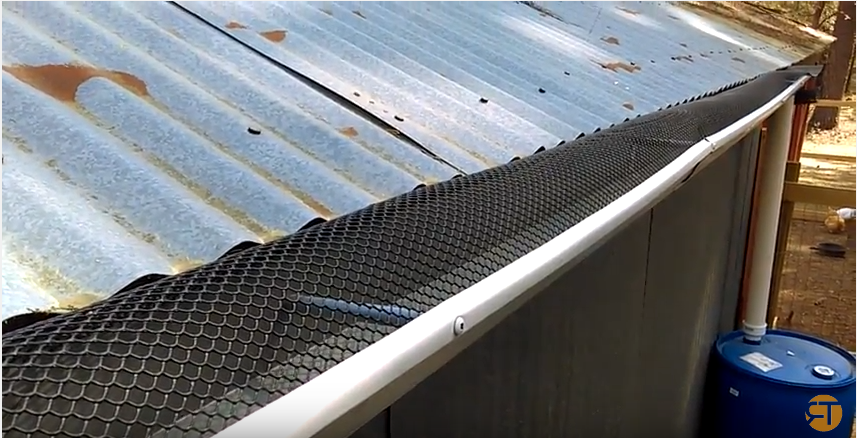 After cutting out a hole for the downspout we added downspout attachment and got it connected to the 3″ PVC pipe we had laying around. That all connect down to the 55-gallon barrel with a PVC funnel, thing – sorry – I don’t recall what it was called (leave it in the comments if you know) 😀

Once the gutter system was hooked up to the rain barrel, we simply joined the automatic watering system with a series of elbows, tee fittings, and PVC glue.

In addition to creating two watering systems, we also added one more tee fitting coming off the watering system that went into the carport. Eventually, we’ll be moving all of our chicken feed into the carport and use that as the staging area for where we mix the feed and ferment it. Because we needed water for fermenting the feed, we made a faucet attachment going into the carport for easy access to the water from the rain barrel.

Not including a lunch break, this project took us about four hours. It’s certainly not a one-man project; though I’m sure one person could get it done. Special thanks to my father-in-law for the extra pair of hands and extra brain to work out some of the design features.

We’ll have a full tour of the system in an upcoming video, so be sure to subscribe for more updates!